Just back from a short break from magazine work, having gone with Mike to a favourite place of his in West Virginia. We crossed the border at Queenston and Mike took photos of fabulous views of the Niagara Escarpment from the American side. The Gorge, The Whirlpool and the American and Canadian falls are truly spectacular at this time of year, with heavy water flow and no leaves on the trees to obstruct views far across the gorge.

About 12 hours later, in the middle of the night, we arrived at “The Fieldhouse,” a cottage managed by the Potomac Speleological Club, where Mike had to get the indoor plumbing working and start a fire in the old woodstove, although it was actually warm enough outside without having to heat indoors. Spring is here!

Next morning we hiked among herds of grazing sheep and baby lambs which Kelly the border collie was good enough to treat with respect, although she couldn’t help but stare at and stalk them for a few steps. This had the mama sheep calling their wayward babies to their sides. Lambs returned the cries from various places on the hillside, and soon they had all herded up and moved away for safety.

Mike led the way to Smoke Hole Cave, an interesting set of caves with openings to light and air, two of my very favourite things when caving. A historic plaque on the road far below, which we saw later, claims that signs of smoke on the roof of a large cave indicates that native Indians may have used the cave to cure meat. After seeing the steepness of the climb to the cave and the lack of flat ground nearby for camping and preparing the meat, I doubt that the natives would care to carry haunches of deer meat there. The caves would, however, provide comfortable shelter around a central fire, so I can see people using them for that.

After the three-hour hike, we drove around the mountainous country where Mike says it takes one hour to go one mile. Spectacular jagged outcrops like Eagle Rock and Cave Mountain look like parts of our own Niagara Escarpment, although they are in a different geological formation, the Allegheny Mountains. We drove from the bottom, where a tributary of the Potomac River flows to Washington, up to the highest point we could reach by car, where a tent and campfire equipment showed that perhaps fishermen were spending the night.

So, after driving 12 hours in order to take a three-hour hike, we were back on the road, gratefully finding a Starbucks for cappuccino in Ohio, something not to be seen in West Virginia, where a couple seeing our Ontario licence plate, asked where we were from. Turned out they are from Stoney Creek, and were on their way to Myrtle Beach and then Florida. Also turned out that they had seen Escarpment Views, but not the spring issue, so we gave them a copy and returned home. Small world. Big mountains!

Have you gone anywhere interesting lately? 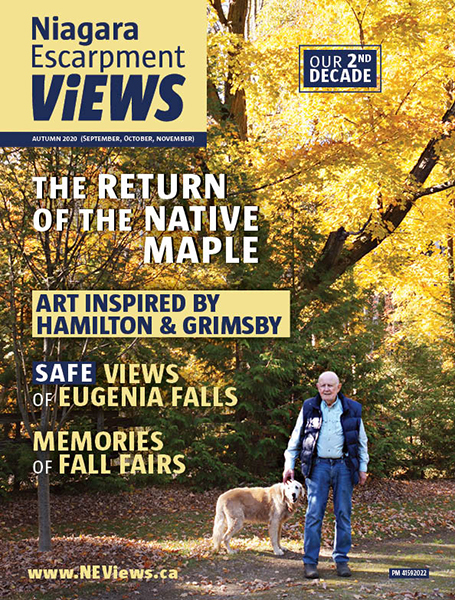